35
Over 35 years of experience in medicine 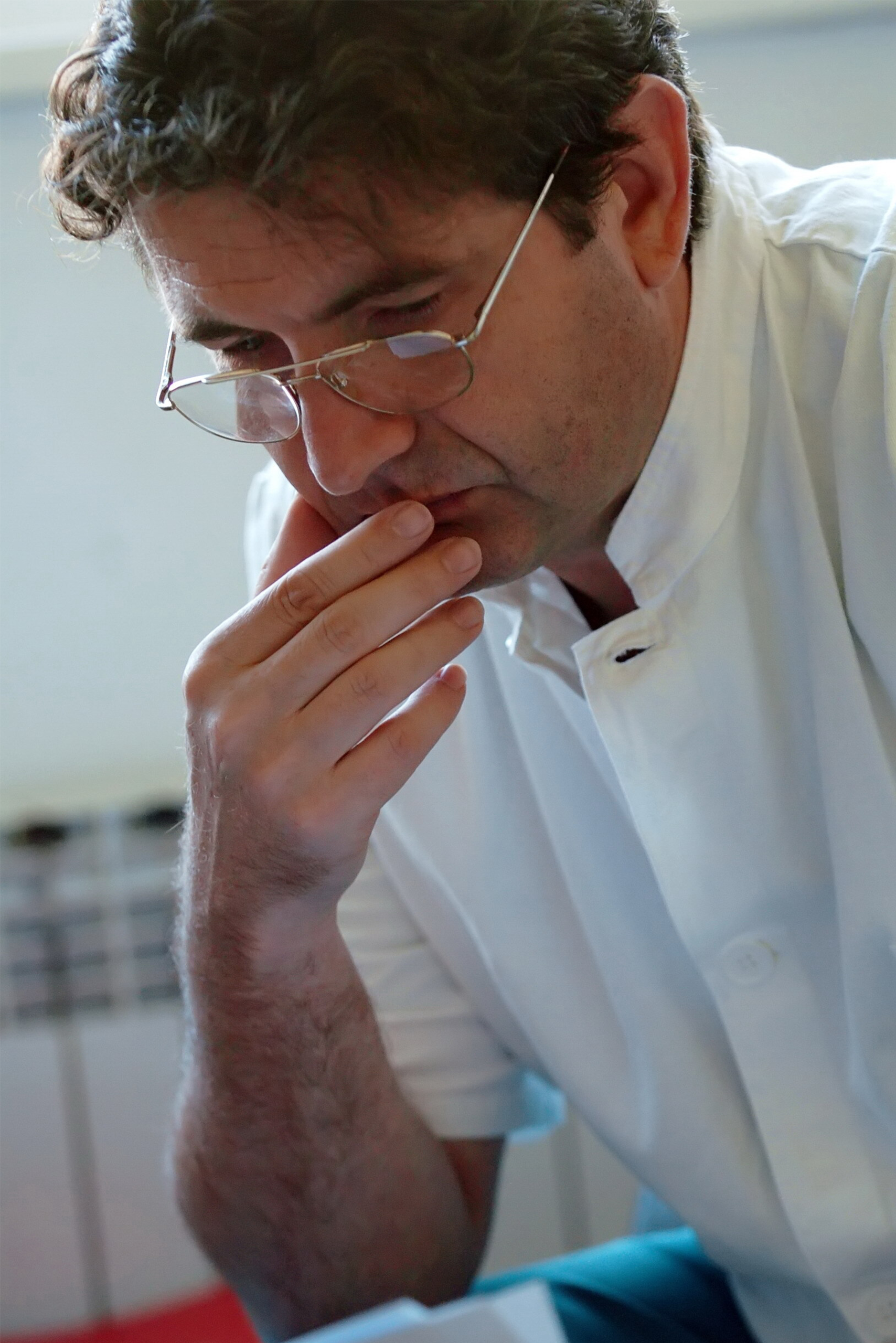 Djordje Radak, was born in 1956. in Vrsac, Serbia. He graduated from School of Medicine in Belgrade, with an average grade of 9.70. He works in the field of vascular surgery and angiology. He finished specialization in general surgery with distinction in 1986, as well as a subspecialization in vascular surgery in 2002. Master's thesis "Experimental atherosclerosis in light of immunological parameters" in 1983 and doctoral thesis "Surgical significance of carotid plaque exulceration" in 1991, he defended with distinction at the Belgrade School of Medicine.

He passed successfully through all teaching positions at the Medical Faculty in Belgrade, starting from the position of demonstrator in anatomy classes (1978-1980), assistant at the Institute of Physiology (1981-1982), assistant in the Department of Surgery (1987), assistant professor (1994) and extraordinary professor, until a tenured professor of surgery (since 2004). As a young surgeon, he won the scholarship of the German government (Deutsche Austausch Dienst - DAAD) and perfected his surgical skills under famous Prof. Vollmar’s mentorship. Later, he continued his training in the UK, the Netherlands and Italy. The knowledge he acquired, he incorporated in the vascular medicine at the Institute for Cardiovascular Diseases ‘’Dedinje’’, where he became director of the Clinic for vascular surgery. He gathered a group of young, good surgeons with scientific ambitions, and gave them the ability to continue training in famous international schools. He also initiated the first laboratory for non-invasive diagnosis in angiology in Serbia.


Dj. Radak annually performs about 600 reconstructive vascular operations, and the team that he leads performs about 2,000 arterial reconstructions and about 500 endovascular interventions on a yearly base, with the results at the level of major international centers. He implemented new methods in vascular (eversion carotid endarterectomy) and endovascular surgery (thoracic and abdominal stent-graft), as first in Serbia. He designed and introduced into everyday clinical use a database for prospective follow-up of early and late results of carotid reconstruction. (2008) He was elected as a Chairman of the University Department of vascular surgery and angiology, at the time of its intensive development. He introduced the Center for Continuous Medical Education and was a mentor for 23 master's degrees, 14 doctoral dissertations and 25 sub-specialization final works.

He trained more than 50 vascular surgeons in the country and abroad, and was vice-dean of the Medical Faculty in Belgrade (2002). Professor Radak deals with all areas of vascular surgery. Thanks to his engagement, Clinic for vascular surgery of the Institute for Cardiovascular Diseases ''Dedinje'' has become "High volume" center that annually performs about 20,000 angiological examinations, 2,000 large arterial reconstructions and about 500 endovascular interventions. Treatment of carotid artery disease has made the clinic run by Dj. Radak well-known beyond the borders of Europe. The greatest interest of the professional public was caused by introduction of eversion carotid endarterectomy (1993), as a revolutionary new method, passing through a phase of early skepticism of the environment to the complete acceptance and the largest series of operations in Europe (over 13,000), with the perioperative complications under 0.6%. (Numerous publications and lectures by invitation of the ECSC, CVS, ESCVS).

The introduction into the surgical repertoire of the first bypass operations of vertebral arteries (1993) and reconstruction of supra aortic branches by transposition avoiding the chest opening (1994), has shifted the boundaries of cerebral circulation repair. The introduction of the carotid artery surgery under local anesthesia (2001) with intraoperative Flow-metry (1996) and later Near-infrared spectroscopy (2013), enabled good perioperative protection of cerebral metabolism, and thus better results. "Hybrid" procedures in the treatment of multiple lesions of supra aortic branches and peripheral arteries are still in development around the world. Dj. Radak introduced them in 2013, using an open surgery, combined with endovascular approach, thanks to good cooperation with interventional radiologists.

Due to the systematic analysis of the results of carotid disease treatment, Dj. Radak has designed and introduced into everyday clinical use the original Database (2011) for prospective follow-up of early and late results of medical therapy and carotid reconstruction (surgery, stenting).

Electronic database now includes over 4,800 patients, who were followed for more than 4 years and will be controlled for further clinical and ultrasound examinations every 6 months. Multifactorial analysis of these data, in the time dynamics (Life table analysis), allows cross-linking of all technical details of interventions, risk factors and diseases associated with early and late results of treatment of carotid disease, as well as insight into the natural history of atherosclerotic disease.

Intrigued by aneurysmal aortic disease, Professor Radak has introduced new methods into vascular surgery in our country, such as autotransfusion during major vascular reconstructions (1992), revascularization of ischemic kidney ex vivo (1996), and thoracolumbothomy for thoracoabdominal aneurysm resection (1997). He participated in the first stent graft implantation in a patient with a thoracic aortic aneurysm (2004), which has opened a new era of endovascular, minimally-invasive treatment of aortic aneurysms.

Endovascular interventions are currently applied successfully in an increasingly broad indication field, and endovascular treatment of aortic aneurysm (2005) led to the development of combined and hybrid procedures for treating diseases of the aorta and peripheral arteries (2010).

Especially difficult field of surgical work of Professor Radak are resections of large, invasive tumors that infiltrate the large blood vessels. Medial visceral rotation to access subdiaphragmatic organs and aorta in resection of tumors that affect large vessels he introduced in 1998 (Int Urol Nephrol). He participated in the first human orthotopic liver and pancreas transplants in our country, including their organization, experimental preparation, indicating and treatment, with the perioperative consultance, from 1996 to 2001.


Professor Radak belongs to the group of current world experts in vascular medicine and surgery. After the election as corresponding member of SASA, he continued and intensified his surgical, educational and scientific activity.

Professor Radak has held about 40 lectures as a (invited lecturer) keynote speaker. He organized the visits of many prominent vascular surgeons from around the world, to give lectures at the Medical Faculty in Belgrade. Dj. Radak was the European coordinator for Asymptomatic Carotid Surgery Trial (ACST I and II), currently the largest international prospective multicenter randomized study in the world, with the results published in the Lancet.

He was elected as an honorary professor of surgery, Professore ordinario, Institutio di cardiochirurgia, Universita di Milan (1995). He was a member of the board of the European Society for Vascular and Endovascular Surgery (ECSC), 2006 and the International Union of Angiology (IUA), 2002. Professor Radak is a Reviewer in the Journal of Vascular Surgery and other journals with high impact factor.


Professor Radak deals with vascular surgery, and the results of his research have been recognized and applied in the vascular surgery praxis and published in numerous papers and several international and national books. As a professor, he participates in ordinary classes of surgery and postgraduate teaching in Vascular Surgery with Angiology, general medicine and cardiology. He led the group to write a national guide for Prevention of cardiovascular disease (Serbian Ministry of Health, 2005).

He has also participated in the creation of another 5 national guides to good clinical practice for vascular surgery (carotid, aneurysmal, peripheral and venous disease, vascular urgent situation and the bypass graft choosing). He introduced new methods in the teaching process (educational DVD videos): Surgical approaches to arteries and Vascular surgery.

He has been elected in several expert committees of the Ministry of Health of Serbia and was a member of the jury for awarding annual prizes of Belgrade Chamber of Commerce for the best doctoral dissertation (2013). He is inviting consultant to the Special Hospital for Cerebrovascular Diseases "Sveti Sava" and Special Hospital for Rehabilitation ‘’Banja Koviljača’’. International communication in and around vascular surgery, for Professor Radak was an opportunity to enable to the young surgeons to be involved in social-science network through membership in selected associations: Serbian Medical Society, Society for Vascular Medicine Serbia, International Union of Angiology (IUA), European society for Vascular Endovascular Surgery (ESVES), International society for Vascular Surgery (ISCM), International society for Transplantology. Prof. Radak's monographs and textbooks have launched a high-quality publication in our vascular surgery.

Postgraduate tutorial "Surgical approaches to arteries" has experienced two editions, and a monograph "Brain revascularization" is preparing for the second edition. The author insists on a simple and systematic solution to the largest practical problems. Generations of surgery residents have accepted these books as a kind of "primers" for surgical techniques and guidebooks of the surgical decision-making.

Professor Radak is a member of the Board of European Society for Vascular and Endovascular Surgery (ECSC), 2006th and the International Union of Angiology (IUA) 2002th. He is Section Editor in Open Cardiovascular Medicine Journal, and a member of the Editorial Board of the World Journal of Clinical Case (WJCC). He is reviewer of the Journal of Vascular Surgery, BMC Cardiovascular Disorders and Angiology. He is a longtime editor in chief of the journal "Medical Investigations" of Medical Faculty in Belgrade.

He is the member of the editorial board of the Military Medical Review, Acta Medicinae Faculatis Naissensis, Actual Novi Sad and Acta Medica Saliniana and reviewer of many books and 8 international journals.

Scientific and practical work of Dj. Radak has led to recognition of vascular medicine in our country and the development of angiology, which was further demonstrated by the inclusion of vascular surgery as a separate specialty in the new curriculum of the School of Medicine. He is the founder of the School for angiologic ultrasound diagnostics, which takes place twice a year, traditionally, for 8 years, with practical training that lasts three months, based on the "Hands on Education" principles. He initiated and led several schools for young vascular and endovascular surgeons from Serbia, Central and Eastern Europe and a large number of seminars of continuous medical education. He won the annual award for scientific work of Serbian Medical Society, medal "Captain Misa Anastasijevic", as well as medal "Dr Vladan Djordjevic" of Military Medical Academy.

He was elected in November 2009 as corresponding member of SASA, participating in the Committee for Cardiovascular Pathology, Committee of Human Reproduction, Committee for tumors of the urogenital tract and interdepartmental Committee for studying the life and work of Serbian scientists.

Dj. Radak has focused his clinical research and innovations on the diagnosis and treatment of arterial and venous disease in vascular surgery. He has published numerous scientific papers trying to enrich the good results of surgery with basic research and thus reduce the number of complications; he also tries to approach to the treatment of genomic, proteomic and metabolic causes of atherosclerosis and aneurysmal disease.


He is an author on invitation in 20 chapters in international books, and as the single author he has published several books and graduate textbook:Radak Dj: Surgical approaches to the arteries. Prosveta, Belgrade, two editions, 1996 and 2004. The textbook for postgraduate studies of Medicine in Belgrade.

Radak Dj. Brain revascularization, Akademska misao, Belgrade, Textbook for postgraduate studies, School of Medicine in Belgrade, 2001.Radak Dj. Carotid surgery. Monograph of the international importance, textbook for postgraduate studies of vascular surgery and angiology, Faculty of Medicine, University of Belgrade, 2012.According to the official data of the University Library, in the Science Citation Index and Web of Science databases, a total number of 1791 citations (with 1307 "on behalf" of citations) were found. His Hirsh index (h-index) is 17. In the Scopus database, Elsevier a total of 779 citations was found, of which 101 citations, and a value of Hirsch index (h-index) amounts 16. Google Scholar database has 826 citations, with an h-index of 18. Professor Radak publishes in magazines with the highest impact factor, and in indexed journals (JCR on the list, WoS and Scopus).